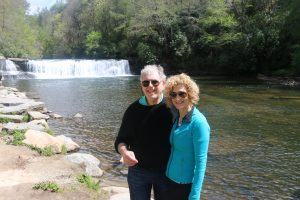 Happy Monday! I was reading today’s Wall Street Journal early today, and came across an article about how a new way of being married or staying together, could be a trend for older couples.

The article related stories about couples here in the United States and Canada who found love later in life after a divorce or a death. These couples decided for various reasons to live apart.  They found that by questioning the time honored tradition of married couples living together was part of their success in making things work after a certain age.

One couple claim that one person is a morning person, and her partner a night owl so living in separate residences makes sense for them. Another couple prefers city living; her partner the country life.   Not living together according to these couples doesn’t mean any less of a commitment on their part. A validation of this decision is the rapidly growing numbers of what is called the gray divorce.  The divorce rate among adults over the age of 50 is continuing to rise.  Many late in life couples prefer to have reduced entanglements of finances or problems with adult children.

This new type of partnership is appealing to men and woman for different reasons.  Apparently, men want to not have their leisure time invaded and woman want to remain autonomous.  A man in the article spoke to his feeling of the thrill of seeing his partner when they are not living together on a daily basis. He feels that living together is boring and  makes his life a gray color.  The suspended time apart makes him want his partner more.

What Are Your Thoughts About This Trend?

I sensed after reading this article that many the people who subscribe to a partnership where they live apart are either very set in their ways and not flexible enough to live with someone, or had disastrous marriages and are afraid living together in a traditional way would ruin the current relationship.

My idea of marriage is traditional, and I can’t imagine living apart from my husband.  I was single for many years and found happiness during those years. This happiness stemmed from my relationships with other people. The marriage where one lives with ones partner is SO much easier and fun — I can’t imagine being in a relationship with a loved one that I see on a part-time basis.