How To Live A Joyful Life Into Your Later Years

Ah, ha I got your attention!  It must be I’m overcome by being sequestered in our condo that is playing with my fingers on the butterfly keyboard. I’ll blame #stayhome #staysafe  for this typo in the headline!  Yesterday, a friend sent me a link to an article in a publication called The Insider.  It was so funny and I want to share some of their secrets  with you.

The people mentioned in this article lived all over the world, and had achieved distinction for being 100+ years old and able to reflect on how they got to be that old!  I found both amusing and interesting the commonalities and the contradictions among all the centenarians and often super-centenarians(110+ years old).

Enjoy their insights below:

1.Misao Okawa(Japan) lived to 110: credits eating sushi and getting a good night’s sleep~

3. Gertrude Weaver(United States) lived to 116: credits being kind to people. Also, not drinking or smoking and sleeping a lot!

4. Jessie Gallan (Scotland) lived to 109: credits her longevity to avoiding men. Thought they were too much trouble and not worth it!

5. Alexander Imich(Poland & US) lived to 111: credits his long life to genetics and lots of exercise!  He was a gymnast, runner and swimmer.  Also, never drank alcohol.

6. Duranord Velliard(Haiti) lived to 111: credits eating healthfully and doing 5-7 pushups daily! He was an early morning person who did pushups before eating a bowl of oatmeal and fruit. Dinner was fish and vegetables!

8.  Bernardo LaPallo(Brazil) lived to 114: he credits his parents; They had good genes and showed him the lifestyle to age well. He awakened early, walked, rubbed his body with olive oil and ate breakfast.  HIs diet consisted of an abundance of fruits and vegetables.  He also mentioned keeping stress under control by taking time for yourself.

9.   Jiroemon Kimura(Japan)  lived to 116: he credits his long life to awakening early, watching his portion sizes and reading a  daily newspaper.  The ability to be resilient in the face of hard times is also crucial.  He exercised everyday.

10.  Mbah Gotho(Indonesia) lived to be 146: Now, there is no definite proof of this, since his country of birth didn’t start recording births until way after he was born.  He credits his longevity to having a loving family. The BBC reports Gotho smoked heavily until his death and outlived 4 wives, 10 siblings and all of his children.

11. Jeanne Calment(France) lived to be 122: She is the longest official person to live!  She smoked as much as she could for most of her life; quitting five years before passing away.  Also,  she felt that olive oil, chocolate and wine were the secrets to her success.

12. Susannah Mushatt Jones(United States) lived to be 115: She swore that eating bacon daily was the key to her long life.  She balanced her bacon intake with fresh fruit! Her niece added that she led a sedate life; never partied(no alcohol or drugs)

SO, do you want to be a super-ager? Im not sure about the pigs’ feet or rubbing down my body with olive oil(wait – didn’t we used to call those Mazola parties?) Are you still reading?  See my headline!

Please let me know your plans for longevity! 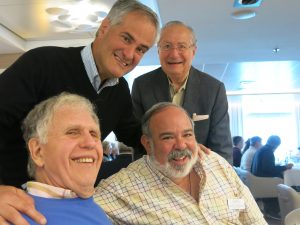